A Day at Con Kasterborous

I recently attended Con Kasterborous this past Sunday.  Con Kasterborous is a Doctor Who themed convention held in Huntsville, Alabama.  It was the convention's second year, and their main guest was Caitlin Blackwood.  Ms. Blackwood played Amelia Pond, the younger version of Amy Pond in several episodes during the past three series/seasons. 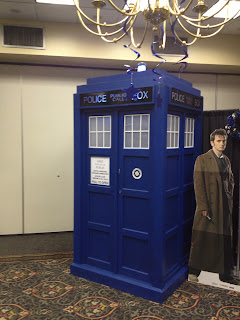 One of two Tardises (or is that Tardii?) that landed at Con Kasterborous this weekend.

I got up quite early on Sunday morning and made my way from my home in the Atlanta area to Huntsville, which is about four hours away.  I arrived at about 8:45 in the morning, just prior to the start of the day's events.  After paying my admission, I debated whether I would sit-in on the Caitlin Blackwood question and answer panel at 9am or whether I would peruse the dealer room.  I opted for the dealer room, since I met Caitlin and attended her Q+A at Timegate last year.

The dealers room had about nine or ten dealers, mostly selling Doctor Who and other sci-fi themed merchandise.  There were also several artists in the artist's alley outside.  I ended buying several prints from Kelly Yates, a comic book artist who has worked on some of IDW's Doctor Who comics.  Kelly was also at Timegate a couple of weeks ago, but I didn't have the money at that time, so it was good to see him again and be able to pick up the prints.  I also bought a couple of books from the dealers as well.

After perusing the dealers room, I attended a workshop panel hosted by Wayne Neumaier.  Wayne had built a Dalek, which was on display at the convention along with several other props.  The Dalek could move about via remote control and a voice box with several sayings.  All in all, pretty cool. 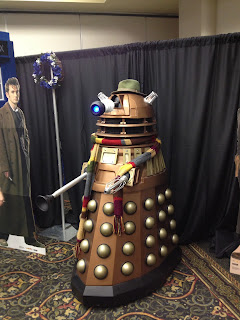 Mr. Neumaier's Dalek.  Pretty darn cool, if you ask me.

I then attended the scheduled swap meet, which turned out to be a bust.  A few people did show up for the swap meet, but there wasn't much trading going on.  I did stay for a while and chatted with a few of the other attendees, talking a bit about Classic Who and Dragon Con.  This turned out to be one of the more enjoyable parts of the convention, at least for me.

After a lunch break, I attended the Creative Fandom with Lady Soliloque.  Lady Soliloque, whom you can find out more about at her website http://www.ladysoliloque.net/, talked about the various aspects of fandom like fan videos, audio dramas, fan fiction and cosplay.   Clearly, Ms. Soliloque is a Doctor Who uber-fan and her enthusiasm was infectious.

After this, I attended part of the Kelly Yates panel.  Kelly talked a bit about his work on the Doctor Who comics for IDW, along with mentioning some of his other work like his creator-owned work Amber Atoms.

The day pretty much closed out with the Caitlin autograph session from 4-5pm, followed by the closing ceremonies.  The closing ceremonies had one thing that I did think was quite cool, and that was a photo montage film featuring Caitlin, Kelly and several of the Con Kasterborous members touring the US Space and Rocket Center that's located in Huntsville.   The con organizers also decided to show the opening ceremonies film during the Caitlin autograph session, which was quite nice since I wasn't able to be there on Saturday.

I will mention one thing that I thought was a rather notable omission from the programming schedule: the lack of a Series 7b panel discussion.  It would have been fun to sit in with fellow Whovians and talk about the recently completed Series 7b, featuring The Doctor and Clara.   A missed opportunity, but perhaps a Series 8 panel discussion could be offered next year at part of the programming mix?

Anyway, my hats off to Bonnie and her staff for putting on what overall was a really good show, one which I quite enjoyed attending.  Bonnie, the convention chairperson, mentioned at the closing ceremonies that attendance at the conventions was somewhere around 1000 people.  That's an impressive number for a second-year convention and Bonnie and her staff should be proud of their accomplishment.  I know how much work goes into putting on a convention, and its always gratifying when the fandom responds by supporting your convention. 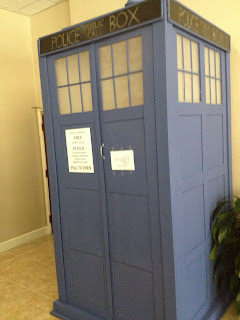 The other Tardis in attendance this weekend at Con Kasterborous.